A workshop by the name of “New Projects for New Units” for university students and the professional community was held at the 2018 Nuclear Days at the University of West Bohemia. Representatives of Atmea, KHNP and Rosatom presented details of their projects.

Let us start with putting right the workshop’s name. Two of the companies are truly new entities interested in the construction of NPP units in the Czech Republic, but Rosatom and its project were previously known from the canceled tender for the expansion of the Temelín NPP. Of the companies who had expressed interest in participation in the Czech project, EdF/Areva, Westinghouse and the newcomer, CGN from China, were not present.

Antoine Verdier, Business Development Director at Atmea, opened his presentation by mentioning the major events which had occurred in France’s nuclear industry in the past several years. The principal items were the restructuring, where erection of new units is conducted by Framatome (owned by EdF, MHI and Assystem) and the fuel cycle is managed by Orano (the remainder of Areva after the exclusion of the divisions for development and construction of NPP units). The next item are the French government's goals pertaining to changes in the energy mix. By 2025 (though Verdier expects it to be later), the share of nuclear power engineering is supposed to drop from 71.6 to 50%, while the share of renewable energy resources (wind, solar, water, biomass) is expected to grow from 18 to 40%. This suggests that the share of fossil resources will be preserved.

More than EUR 55 billion is planned for investment in the modernization of nuclear power plants in France in the next 15 years. The Grand Carénage program aims at extending their operation beyond 40 years and increasing their safety.

Verdier also commented on Japan’s position on nuclear power. After the Fukushima disaster, the Japanese government confirmed its principal role in the country’s power engineering and is planning to set the share of nuclear power in electricity production to 20-22% by 2030. Before 2011, the share was 28%. Considering the fact that 7 units have been recommissioned, 9 units are in various stages of safety assessment and 7 will be decommissioned, the approach will require the erection of new units. The discussion above only includes PWR reactors; none of the BWR units have been recommissioned. Looking at the current number of NPP units being built worldwide, Japan could restore its position as a major player in the field of nuclear power.

Verdier stated that the safety of the Atmea-1 reactor is based on 4 pillars: modern safety systems, proven technology; economy and reliability, and protection of people and of the environment. The basic solution uses active safety systems with supplemental passive systems.

The offer by South Korea’s KHNP, presented by Joonkyo Suh from KHNP’s Czech office, does raise several questions. The documentation contains two versions, EU-APR and APR-1000, which slightly complicates orientation within the topic.

The Korean type OPR-1000 served as the base for the APR-1400, built in Korea and the UAE. Derived from it are the US-APR version for the USA and the EU-APR for Europe. Further development leads towards the APR+ reactor rated at approximately 1500 MWe. The APR-1000 is based primarily on the OPR-1000 modified for Europe but uses safety systems from the APR-1400 and APR+ reactors.

The EU-APR reactor might suffer from a disadvantage, as Dukovany NPP officially assumes the use of units not rated above 1200 MWe. The goal is to have the first of

The VVER-1200 probably needs no technical introduction. Another topic presented by Leoš Tomíček, Vice-President for Nuclear Projects at Rusatom Overseas, are the supplier models and the different costs for two units in one location and in multiple locations. Those words supported the statements made by František Hezoučký from the Faculty of Mechanical Engineering at UWB in the opening workshop of the 2018 Nuclear Days. Hezoučký stated that the costs of the construction of two units in two locations are about CZK 40 billion more than the cost of the construction of two units in a single location.

Tomíček added that by Rosatom’s estimate, one individual unit comes at 55-60% of the costs of a two-unit plant because a single-unit and two-unit plants require ancillary operations of approximately the same size. Therefore, those need to the erected approximately of the same size whether it be for a single-unit or a two-unit plant. Tomíček indicated that the higher costs may also arise if the two units were to be built in the same location but a long time after each other. This is a response to the National Action Plan for the Development of Nuclear Energy and the State Energy Concept, which state that 1 or 2 units are to be built in each location without any sequence specification. 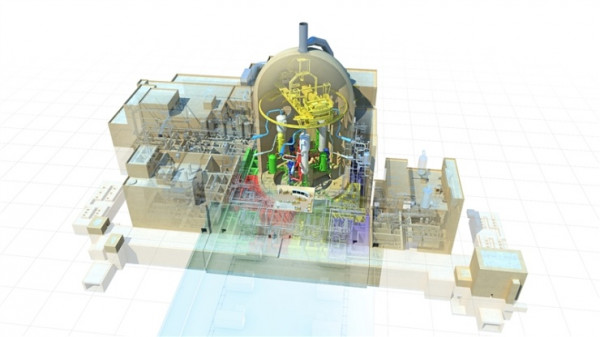 While VVER-1200 and EU-APR (also APR1000) reactors use a full-pressure double containment, the Atmea-1 features a single dome (the cylinder part also has double walls and is ventilated through filters). Verdier states that the containment dome of their reactor has a wall thickness of 1.8 meters, which, according to their calculations, provides enough protection of the primary circuit from the impact of an airplane. He said that there are two approaches offering the same outcome.

All the designs (Atmea-1, EU-APR, APR-1000 and VVER-1200) feature a core catcher. Should an accident occur of such severity that would eliminate the multiple redundant and diversified safety systems and severe accident guidance systems, and the nuclear fuel would melt, a system is located beneath the reactor to localize the molten core and provide its long-term cooling. However, various companies offer various approaches to the issue.

Atmea-1 utilizes a catcher like the EPR, where after the molten core has left the reactor vessel, it flows into a concrete shaft to spread into a large area. Here it will be cooled by water inside the shaft walls and by flooding water. A similar approach is used in the South-Korean reactor designs; however, none of the KHNP reactors has featured a catcher so far. On the other hand, the catcher at the VVER-1200 is formed by a steel vessel filled with special material with which the molten core mixes for easier cooling. The core catcher is a standard component of the VVER-1200 design; it is also deployed in the Tchien-wan NPP (China) and Kudankulam NPP (India) with VVER-1000 reactors. 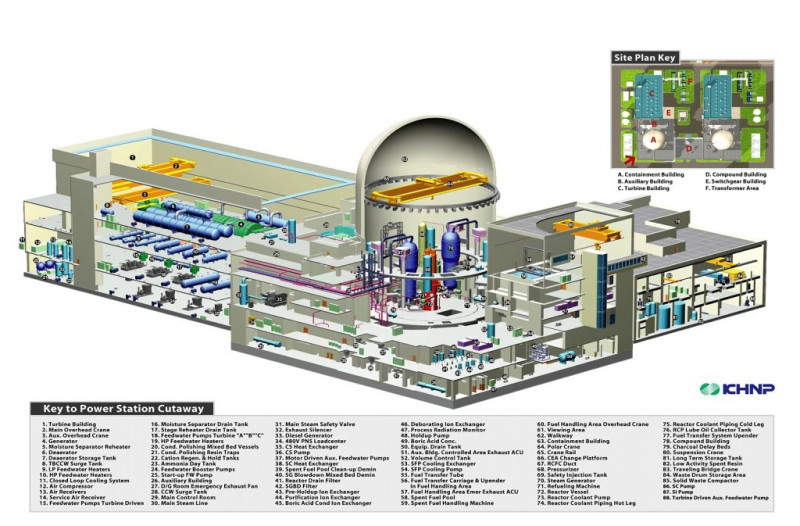 While no Atmea-1 reactors have been commissioned or built so far (the first is planned for erection in Turkey; the project is currently in the detailed design stage), the important aspect is that all the basic components are already being used in other NPPs. For example, there are steam generators with economizers in use since 1996 in 4 French N4 series NPPs, forged main circulation piping used at 3 units since 1997, the material for the pressure vessel used for over 40 years, etc.

While KHNP uses the references of the APR-1400 reactors, the differences between the South-Korean reactors mentioned above suggest that they cannot be applied without limitations to the designs offered to the Czech Republic. For example, the core catcher has not been used anywhere so far.

The only actual reference power plant is that of Rosatom. It is Unit 1 of the Leningrad II NPP, which is currently in the start-up stage (it has reached 50% of capacity). 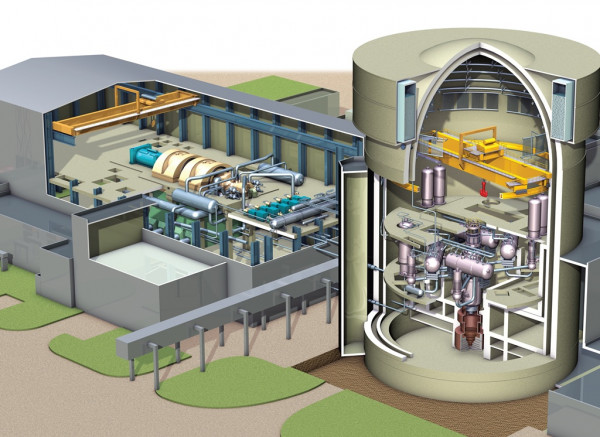 Atmea stated that it has extensive experience in international building and localization. Verdier said that they were aware of the advancement of the Czech nuclear power industry and they were looking for collaboration potential. They agree that the building works in the Czech Republic would be carried out by Czech workers, not by personnel from abroad. At any rate, Atmea would keep in their competence the nuclear system for steam generation (i.e., the heart of the power plant: the reactor, steam generators, etc.); the rest could be localized. Atmea builds on Areva’s experience in supplies of EPR reactor internals, the support ring of the EPR reactor and the spent fuel discharge equipment supplied by ŠKODA JS.

South-Korean KHNP also says that they are aware of the potential Czech companies have for engagement in the project.

Tomíček highlighted one special trait of the Czech project. Rosatom’s experience from signing the latest contracts suggests that localization always comes first. However, it has so far been promised based on the good will of the technology suppliers, but it has not been officially required.

Tomíček also suggested that Rosatom, in the information submitted to the Ministry of Industry and Trade last year, presented several potential supplier models which offer various degrees of engagement of Czech companies. The possibilities range from a comprehensive, turn-key supply of the NPP (as seen in Iran, etc.), the supply of the nuclear island (originally in India and China), to supply of the key components only (construction of Units 7 and 8 at Tianwan NPP in China – 80% localization, and other units in India). Tomíček claimed that the supply of components during construction provides the greatest certainty for future energy independence. It is the same case with existing Czech NPPs: most supplies were carried out by Czech companies who still provide spare parts, rendering reliance on foreign suppliers unnecessary.

Tomíček also said that Czech companies have become important suppliers to Rosatom. They have engaged in the construction of all NPPs in Russia and practically all the NPPs built by Rosatom abroad (apart from Bushehr, where Czech companies are banned from supplying by law). Tomíček concluded that all NPP units in the Czech Republic operate very well using Rosatom technology, which is the best recommendation for Rosatom, who is offering an evolutionary design based on the same equipment.