In the last couple of years, quite a few companies specialized in the construction of nuclear power plants went bankrupt. As František Krček, GM of ŠKODA JS, says, if ČEZ finally decides not to build the new reactor in Dukovany NPP, the whole industry could face existence problems. In the meantime, his firm hopes to win a huge job order as Ukraine prepares for completing the construction of two power units.

HN: Many firms have to deal with problems due to the new coronavirus. How does your company manage to cope with the current situation?

Touch wood, the number of people down with Covid-19 in our company is still quite low. We have about 15 positively tested employees now, most of them with a light course of the illness, with no impacts on the company operation so far.

HN: You are a primarily export-oriented firm. Are you allowed to travel at all?

There are certain restrictions, of course. Fortunately, there are exceptions for a critical infrastructure which apply to us, so when we get an invitation to Ukraine, we can go there with negative test results. Yet it is a problem which complicates quite a number of projects. At present, for instance, we are working on a project where we need people from our country, Slovenia, Russia and Ukraine to meet at one moment in one place in a third country. This is an almost unsolvable problem.

The restrictions were even harder in the spring this year than they are now. The problem is not only the travel restrictions but also the offer of the airways. For example, I had a meeting in Rome in July, which got prolonged to a trip of three days instead of one because the only chance to get an airline ticket was for Rome on Monday and back on Wednesday. Or we have jobs to do in Armenia, and it is really a problem to get there.

HN: Has the coronavirus had any impacts on your job orders?

Our field of business features a high effect of inertia. Most of our customers are power engineering companies, with their projects being extended for three, four or more years. No contracts or tenders have been cancelled so far. But as soon as our customers start reassessing their investment plans, we may find in a year or two that the number of opportunities has dropped considerably.

HN: Can the crisis bring a new business?

I don’t think so. But I think that it can bring a different view of energy self-sufficiency. Let’s recall the situation in the spring concerning the coronavirus protective aids. In the long run, the countries had to address their own problems themselves, sometimes even by taking quite non-standard measures, such as the ban on export. What I mean is the planned project of the fifth power unit at Dukovany. The investor, which is ČEZ, should think about not only who will build up power units but, subsequently also, who will supply service and maintenance works for the facilities. Today, the service of nuclear power plants in the Czech Republic is provided by Czech firms. Which means that when the borders were closed in the spring, it did not affect ČEZ in any way. But if foreign companies had a 20 or 30 percent share, there would be a concern.

HN: So, in your opinion, ČEZ should choose a reactor well known to the Czech firms? There still are the Russian VVER type ones only in our country …

The problem lies somewhere else. If your firm XY wins a tender, then unless pressed by the investor to hand over service to local companies, you would not do it by yourself. The nuclear business is not finished by constructing a power plant. It is followed by 30, 50, 60 years of investments, maintenance, reconstruction, service and other works. At present, the deal is worth three to four billion in the Czech reactors every year.

HN: So, it is not about technology but about how the contract is worded.

Exactly. Today, we are servicing facilities we did not manufacture. But as a Czech firm, you must have an opportunity to win the job. Now we have job orders in the Czech Republic, Hungary, Ukraine and Armenia, for instance. Yes, they are the VVER technologies, but we also cooperate with EDF for which we will supply reactor internals for their British power plant Hinkley Point C.

HN: Did you also cooperate with other firms? Rosatom?

Our most extensive cooperation with Rosatom was on a tender for the completion of Units 3 and 4 of Temelín NPP (editor’s comment: ČEZ cancelled the tender in 2014). But in the past, we also worked with Westinghouse as a manufacturer of fuel elements, among other things. Lately, we were contacted by all the applicants for the potential Dukovany completion project. Some parties still see us as a company which “only” supplies equipment to nuclear power plants. But we have moved forward significantly since 2002. One half of our turnover is taken up by engineering, one fourth by service, and one fourth by production. For instance, we were one of the contracting partners in the completion project for Mochovce NPP in Slovakia, which did not only consist of supplies but also project management, installations, commissioning … we are not a purely manufacturing factory.

HN: In the CR, since the tender for Temelín, a number of power engineering companies crashed… Can Czech people still build nuclear power plants at all?

We have one massive advantage against other countries which contemplate building nuclear power units, namely that we have built up, manufactured and commissioned our power plants almost completely ourselves. If you take the example of Dukovany or Temelín, 90 to 95 percent of the equipment is “Made in Czechoslovakia/Czech Republic”. By building the units in the past and by building Mochovce now and by servicing the units, we still keep the trade and the knowledge. If the decision is not to build the new power unit, we will still be able to operate them but will gradually lose the building know-how. Then I would join the sceptics who maintain that Czechs have already lost the knowledge of how to build nuclear power plants.

As for the capacities of the Czech industry, we as ŠKODA JS cooperate with 264 Czech companies which supply us with materials, services, engineering, etc. This number shows that the field really is not dead. Of course, one cannot compare the strength of the company Škoda in the 1980’s and now. But it depends on the opportunities offered by the market. For instance, information appeared a couple of weeks ago that Poland plans building six nuclear power units. Without speculating about the course of the project, whoever will be chosen to build up the units, they will present a great opportunity for the Czech nuclear industry.

HN: Are we still able then?

I started studying nuclear power engineering in 1990. As chance would have it, in 1996, I found myself in Temelín working for ČEZ, and when commissioning started in 1999, I was in the position of a head of the auxiliary technological system tests. In the management of the primary circuit of Unit 1, there were eight of us in total, of whom six were under 30 years of age. And the two “very old” ones, they were around 40. Of course, we had colleagues around us, for instance from among suppliers, who had experience from the construction of Dukovany. But why I talk about it. If this field gains certain prospects, we still have enough time for it to be attractive for young people to study it. Then, we will be able to build up the human force needed for construction and commissioning. But we have the last chance to stimulate the sector. If the new nuclear source project is stopped again, in 15 years, I’m afraid, we might not be able to find the human capacities we need.

HN: Haven’t we already lost some know-how for good?

Let’s return even farther back into history. The decision that Czechoslovakia would pursue the path of peaceful utilization of the nuclear energy was taken in 1956. Two years after that, a first team of designers was established to start developing first reactor A1 in Jaslovské Bohunice. The reactor was commissioned in 1972, even if, unfortunately, its operation met with quite a bad luck later (editor’s comment: two nuclear accidents occurred in 1976 and 1977). So, our grandfathers started working on a greenfield to start up a functional power plant in 14 years. We, from now on, are not starting at zero. There is still a strong generation of those fifty-year-olds who commissioned Temelín and now work at Mochovce.

HN: You have mentioned Mochovce repeatedly. But it is rather a warning example of how not to build a power unit, with the enormous delay and many times exceeded budget.

I will speak about the technology now, as I don’t want to opine on work organization. In view of the technical level, it is a flagship of the Czech nuclear industry.

HN: The police investigated your company in Slovakia in the spring, allegedly due to using wrong pipes.

There is a suspicion of inconsistencies in the documentation concerning the pipe material properties. The investigation is still pending. But we have analysed the materials, with the results being that not a single metre of pipeline had to be replaced at Unit 3.

HN: The Mochovce project is nearing the end. Which other markets are crucial for you? Ukraine?

In addition to Ukraine, we have some jobs in Hungary and we also work on projects in about 10 countries. In Ukraine, we currently negotiate very intensively with Energoatom, which is the operator of the Ukrainian nuclear power plants, about the completion of Khmelnitskyi NPP Units 3 and 4. This topic is up again after five years, but the whole project is still at the beginning.

HN: What would be your role in the project?

We would be the supplier of the nuclear island equipment.

HN: Earlier, the media had it that the completion project could be worth up to 60 billion Czech crowns. What would be your portion of the sum?

We are now in the phase of starting assessing the condition of the equipment already supplied there before abandoning the project in 1991. Originally, the Khmelnitskyi Nuclear Power Plant had to have four power units, similarly as Temelín. Two of them were finished and the project was stopped at the moment of 60-70 percent being constructed of the third unit and about 20 percent of the fourth one. Now, the assumption is to complete the third unit and to see whether the fourth one would pay off.

We will be able to enumerate our part when the equipment condition is assessed. Right now, it would be mere speculations. The sum of the potential contract will be based on our establishment of the condition of the equipment and documentation and on what can be reused and what not. 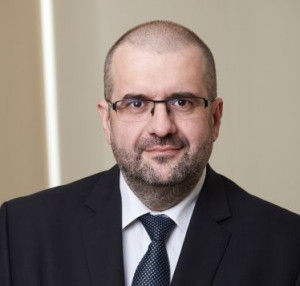 He graduated from the Faculty of Mechanical Engineering of Brno University of Technology, the subject of thermal and nuclear power machinery and facilities. In 1996, he started to work for ČEZ at Temelín Nuclear Power Plant being constructed then.