Two moisture separator reheaters are currently being replaced by technicians at Unit 1 of Temelín Nuclear Power Plant. The facilities weighing one hundred and ten tons each and used to remove moisture from and reheat steam were positioned recently in the machine room of the conventional island of the power plant. Now, the internals will be installed in the separators and connected to other technologies. The separator replacement schedule has 453 partial activities in total, which makes it one of the most challenging operations during the Unit 1 shutdown. The power plant management expect the new equipment to increase the output in the order of units of megawatts electric (MWe).

Without the internals, either of the two separators weighs 110 tons, is thirty metres long and four metres high. Distances in the order of millimetres determined the separator seating process precision. Before that, the technicians had to lift them 15 m to the machine room through the transport corridor. “The positions of the separators are given strictly so that they can be connected to the adjacent technology. Therefore, we had to seat them with millimetre precision. No complications were encountered during the installation,” said Jan Kruml, Director of Temelín NPP.

The process of seating each of the huge separators lasted one eight-hour shift. The specialists handled the vessels by means of a 125t overhead crane. The first vessel was seated on Sunday, and the other one day later. The replacement itself does not only concern the handling of the huge equipment. Another procedure will be the connection to the technology of the power plant. “In practice, it means that Škoda JS technicians have to interconnect each separator with as many as approximately sixty different pipelines of diameters ranging from twenty millimetres to slightly more than two metres. The whole assembly will then be verified in post-assembly and unit commissioning tests,” said Bohdan Zronek, Member of the Board and Chief Nuclear Officer of ČEZ a.s.

The ČEZ management expects the new separators to increase the power plant output. “The increase will be in the order of units of MWe. This is another example of modernization and equipment efficiency increase in the power plant’s conventional island, with further benefits for the environment thanks to reducing yearly CO2 emissions by units of thousands,” added Bohdan Zronek.

ČEZ carried out the shutdown of Unit 1 at Temelín NPP according to the schedule on 27 March. During the shutdown, the power engineering specialists will replace 48 out of 163 fuel assemblies in the reactor, check the safety systems and carry out 73 investment projects. The shutdown schedule covers almost fourteen thousand activities in total, which are performed by one thousand workers from ČEZ and supplier firms. The shutdown is controlled in a strict “covid mode”.  In practice, it means making as many as thousand tests of the employees and supplier workers daily. (https://www.cez.cz/cs/pro-media/tiskove-zpravy/temelin-planovane-vymeni-palivo-v-reaktoru-prvniho-bloku.-na-odstavku-posiluje-proticovidova-opatreni-139889) 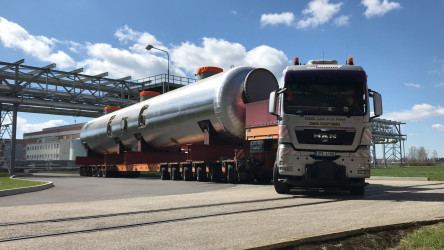 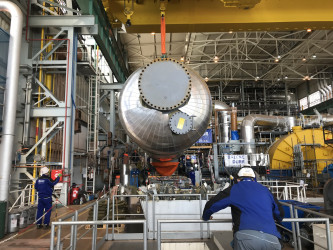 Moisture separator reheater – equipment in the conventional island of the nuclear power plant. The manufacturer is German company Balcke-Dürr, GmbH. The separator is 32.8 m long, 4.4 m high and has the total weight of 180 t. Each of the two separators includes 1,512 heat-exchanging tubes of a total volume of 13.5 m3. The volume of the separator itself is 232.4 m3. Its task is to improve the parameters of the steam flowing towards the low-pressure parts of the turbine. More specifically, it removes moisture from and reheats the steam.

Since the beginning of the year, Temelín Nuclear Power Plant produced 4.8 terawatt-hours of electricity. Together with Dukovany NPP, they are the two sources which produce the greatest quantity of clean electrical energy, whereby contributing significantly to the ČEZ Group’s emission-free production commitment. Owing to the nuclear power plants, the emissions of CO2 are lower by approximately twenty million tons every year.