Spatial Coordination at the Mochovce and Dukovany NPPs 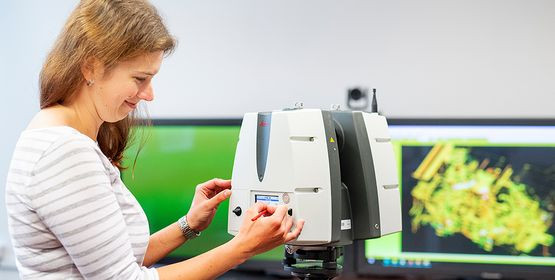 At the beginning of 2018, the creation of a 3D model of the actual state of the Post-assembly clean-up operation at Unit 4 of the Mochovce NPP commenced. This activity was successfully completed on schedule at the end of 2018. The result was documentation for approx. 2,800 pipelines and auxiliary steel structures. The 3D model was created using approx. 140 scanned images of the technologies of the main production unit.

At the same time, a 3D model of the piping of the steam/water system (from the steam generator to the hermetic penetration) in Units 1, 2 and 4 at the Dukovany NPP was created. This model was made using scanned images taken in the buildings of the main production unit. The documentation from this model was used as the basis for the piping calculations.

In 2019, the Laserscan project was implemented for ČEZ, a. s. and its Dukovany NPP, to scan the internals of Dukovany´s main production unit. During outages of individual units, ŠKODA JS employees performed scans directly in the hermetic parts of the unit, often in confined spaces and under radiation exposure.
According to the customer’s requirements, a data export was created from the scanned data for all affected rooms;
it included the export of all room scans to the Leica TrueView environment, which enables virtual and realistic viewing, as well as room point cloud export to E57 format as a source of input data to later creation of a 3D model. 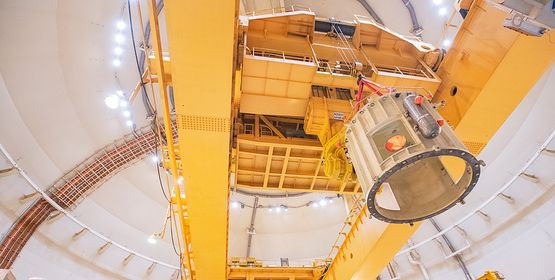 The project will include complete replacement of the control management system and electrical components of the polar bridge crane. In the mechanical part of the crane, the existing 80-ton crane trolley will be replaced with a new trolley with a capacity of 160 and 2×80 tons. The crane trolley of the main 400-ton hoist will be equipped with a new hoist mechanism, trolley travel mechanism, equipped with an emergency brake, a new cable drum and wire rope, and the auxiliary 10-ton hoist with a block with a swivel fork will be replaced. Also replaced will be the rotation mechanism of the polar crane bridge, the runway rail for the cable folding system, and special loading and handling tools will be designed and supplied for disassembly and assembly. This project, including the design, deliveries, assembly and commissioning, is being implemented by ŠKODA JS in cooperation with the FRAMATOME Company and other companies at eleven VVER 1000 nuclear units in Ukraine. The design phase of the project took place in 2018. The complete documentation was prepared in line with the GOST and PNAEG standards. Venting is a passive system, which in the event of an increase in pressure inside the containment will release, through a filtration system, a mixture of steam and gas into the surrounding environment. It is a two-stage filtration system contained in a vessel 3.4 meters in diameter and 5 meters in height. Due to the temperature specification of 295°C and seismic resistance requirements, the vessel was made of 08Ch18N10T material of a thickness ranging between 22 and 24 mm. The assembly of the tank, consisting of 34 parts, will take place on site, as the clearance of the only transport route is a mere 60 x 160 cm.

The filtration process itself takes place in the vessel and the required filtration effectiveness is 99.999%. The system also serves to remove heat from the containment, which is achieved by steam condensation inside the vessel.

Assembly is currently in progress and is expected to be completed in mid-2021. ŠKODA JS supervises the assembly of the systems and directly manages the assembly and welding works on each system’s main pressure vessel.

Cask for Leaky Spent Fuel for the Temelín NPP

The development of a new cask for leaky VVER 1000 spent fuel is based on a modification of the existing ŠKODA 1000/19 cask. In collaboration with the University of Chemistry and Technology, Prague, in the design phase, additional water and hydrogen absorption was addressed by the special inner structure of the cask. In connection with the optimization of the system of cask drying, leaky fuel tightness tests have been prepared and partially conducted using mock fuel pellets. The issue of hardware and transferring the test results to the product is dealt with in the Department of Calculations at ŠKODA JS and the Těsnost s.r.o. Company.

As part of subsidy programs, we intensively work with the Generation IV reactor technology based on molten salt and helium. We also developed a Hydrogen Steam Autoclave for the Řež Research Center. The new system allows for testing of changes to material properties in an environment of overheated water steam with an addition of hydrogen, a hydrogen steam mixture. One of the effects examined is, for example, hydrogen embrittlement.

Based on the request of ČEZ, a. s., the Laserscan project of the Hněvkovice hydroelectric power plant was implemented in 2019. This power plant is located inside the Hněvkovice dam on the Vltava river. There are two sets of Kaplan turbines (2 × 4.8 MW) installed in the power plant. The Laserscan was implemented at a time when one unit was undergoing overhaul. The entire machinery was dismantled, so there was a unique opportunity to scan
the building part, which is completely inaccessible during operation. Laserscan was implemented by means of the new Leica RTC360 scanner. The total time of one scan (taking a point cloud + HDRphotos) takes less than 5 minutes with this new device, speeding up, streamlining and improving the work. During scanning, almost the entire technology and construction part of the Hněvkovice power plant was captured. A total of 173 scans was performed at this power plant.

2018a 3D model of the piping of the steam/water system (from the steam generator to the hermetic penetration) in Units 1, 2 and 4 at the Dukovany NPP was created