For more than a quarter of a century, we have also operated in the market of PWR and BWR-type nuclear power plants. Our entry into this market required the necessary certifications to be obtained, such as ISO, ASME, DIN, CEFRI and others. We have gradually worked our way to the role of a qualified supplier of nuclear equipment to the main contractors and operators of nuclear power plants in Europe, the USA and the Far East. The company is able to manufacture equipment according to the customer’s documentation as well as develop and manufacture entirely new equipment based on a basic design assignment. 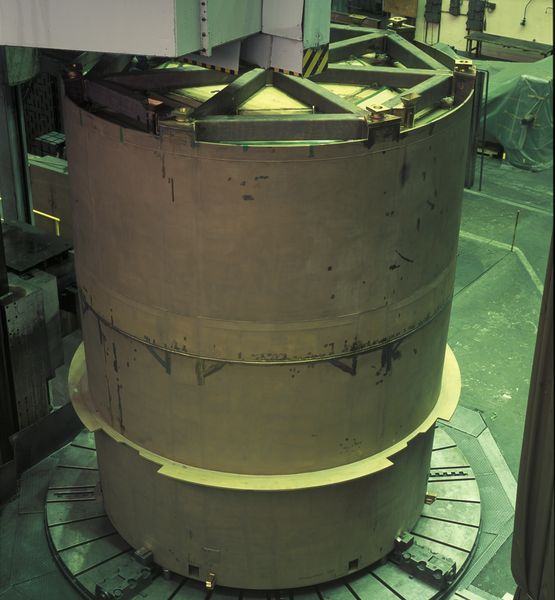 An important project for ŠKODA JS was the manufacture of internal parts and a support ring for a newly constructed pressurized water EPR-type reactor (III+ generation pressurized water reactor) at the Olkiluoto NPP, Finland. The customer, Areva NP, now FRAMATOME, also ordered a reactor internal parts handling device for the same project (supplied in 2008–2010). Based on good references from this project, ŠKODA JS concluded another contract with the same customer for the manufacture of EPR reactor internal parts for Unit 1 of the newly constructed Taishan NPP, China (supplied in 2012).

In 1993, ŠKODA JS manufactured a reactor pressure vessel support ring for Unit 1 of the French Civaux NPP, intended for the installation of the reactor in the concrete cavity. The support ring was a thick-walled welded structure weighing 46 tons.

In 2018, ŠKODA JS concluded a contract with the French company FRAMATOME for the production and supply of two sets of pressure vessel internals for the 1600 MW EPR reactor at the Hinkley Point C NPP in Somerset, UK. The delivery includes in particular: core barrel, heavy reflector and upper internals (similar to the upper block of VVER 1000 reactor).

A stud tensioner is a fully automated device that operates the main flange joint of the reactor, meeting extreme requirements for accuracy, speed and functional reliability.

Based on the contract concluded with the main contractor of the Lungmen project, GE Nuclear Energy, ŠKODA JS a.s. designed, manufactured and supplied two sets of reactor main flange joint stud tensioners to the newly constructed Lungmen nuclear power plant in Taiwan.  The device is designed for seismic areas, temperatures up to 40 °C and relative humidity of 95%.

Apart from the aforementioned reactor parts, ŠKODA JS develops and produces other equipment for nuclear power plants with PWR- and BWR-type reactors.

In 2000, four hydrogen recombiners were supplied to the Lungmen nuclear power plant in Taiwan (ABWR).

In 2002, a heat exchanger for the spent fuel storage pool was supplied to the Krsko nuclear power plant in Slovenia. This device was produced according to the ASME Code, Section III.

Equipment for the transport of fuel

Over the 25 years of our activities in the area of PWR and BWR reactors, we have made a name for ourselves as a reliable supplier capable of designing, manufacturing and commissioning highly sophisticated nuclear equipment.

After a successful audit, ŠKODA JS a.s. became a qualified supplier for Électricité de France (EDF), with which it concluded a contract for the supply of  a spent fuel cask transfer facility for the newly constructed Unit 3 of the EPR-type Flamanville NPP in France. The equipment was handed over to the customer in 2017 and the scope of supply included equipment design, detail design, manufacture, on-site installation and commissioning.

The history of the project

1991reconstruction of 13 sets of filters of the main condenser (BWR) for the Olkiluoto NPP, Finland

2002delivery of an ABWR reactor main flange joint stud tensioner of our own design intended for the Lungmen NPP, Taiwan

2017proprietary equipment for the transfer of spent nuclear fuel casks for the Flamanville NPP, France